I blogged a while ago about a rather ugly and hacky way in which you could get the goodness of jQuery (and general JavaScript) IntelliSense in the Razor editor in Visual Studio 2010’s IDE.

This basically involved placing code similar to the following into every MVC view where you wanted IntelliSense to show up:

In Visual Studio 2012 (hereafter referred to as VS2012) this has been achieved by allowing an additional file to be placed within the solution/project which will contain a list of “references” to other JavaScript files that all MVC views will reference and honour.

The first step to configuring this is to open up VS2012’s Options dialog by selecting TOOLS > OPTIONS from the main menu bar:

Once there, you’ll want to navigate to the Text Editor > JavaScript > IntelliSense > References options: 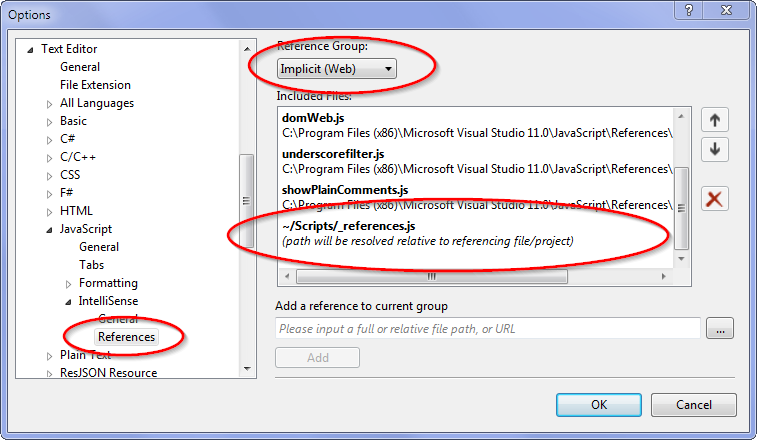 The first thing to change here, is to select Implicit (Web) from the Reference Group drop-down list.  Doing this shows the list of references and included files within the Implicit (Web) group, as shown below the drop-down. Implicit (Web) includes a number of .js files that are included with VS2012 itself (and are located within your VS2012 install folder), but it also includes the following, project-specific entry:

Of course, this is all configurable, so you can easily add your own file in here in your own specific location or change the pre-defined _references.js, but since ASP.NET MVC is based around convention over configuration, let’s leave the default as it is!  Click OK and close the options dialog.

Now, what’s happened so far is that as part of the pre-defined Implicit (Web) reference group, VS2012 will look for a file called _references.js within a web project’s ~/Scripts/ folder (the ~/ implying the root of our web application) and use the references that are defined within that file as other files that should be referenced from within each of our MVC views automatically.

So, the next step is to add this file to one of our MVC projects in the relevant location, namely the ~/Scripts/ folder.  Right-click on the Scripts folder and select Add > New Item: 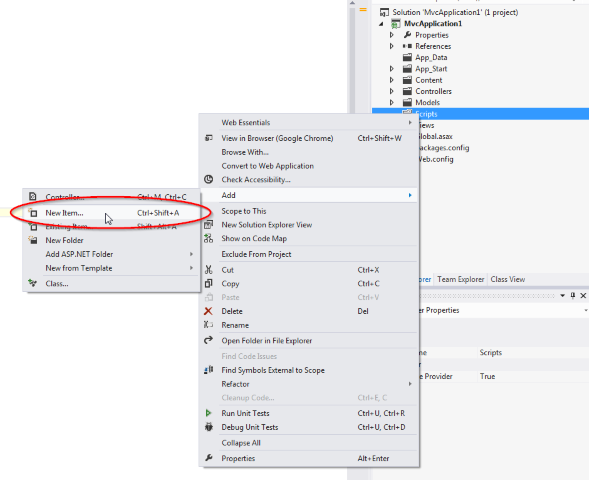 Once the Add New Item dialog is displayed, we can add a new JavaScript File, making sure that we name the file exactly as the default pre-defined Implicit (Web) reference group expects the file to be named: 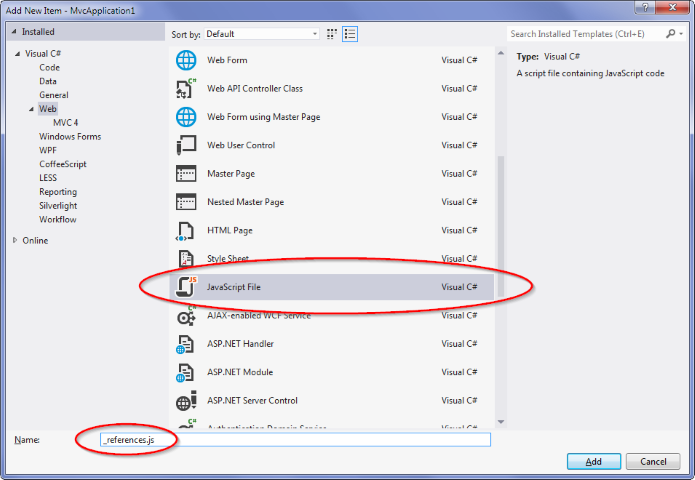 The format of the _references.js file follows the JScript Comments Reference format that has been in Visual Studio since VS2008.  It’s shown below:

You can add as many or as few “references” within the _references.js file that you need.  Bear in mind, though, that the more files you add in here, the more it may negatively impact the performance of the editor/IDE as it’ll have far more files that it has to load and parse in order to determine what IntelliSense should be displayed.   A sample _references.js file is shown below: 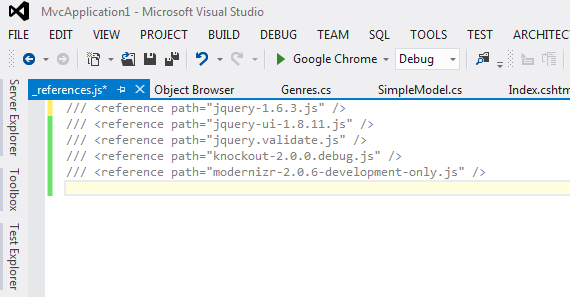 The format/syntax of the references within this file can take a number of forms.  You can directly reference other JavaScript files without needing a path if they’re in the same folder as the _references.js file (as the example above shows):

You can use relative paths which are relative from the folder where the _references.js file is located:

And you can also use paths that are relative to your web project’s “root” folder by using the special ASP.NET ~ (tilde) syntax:

Once this is configured and saved, you will now have lovely IntelliSense within your MVC Views withoutneeding additional hacky script references from within the view itself.  See the screen shot below: 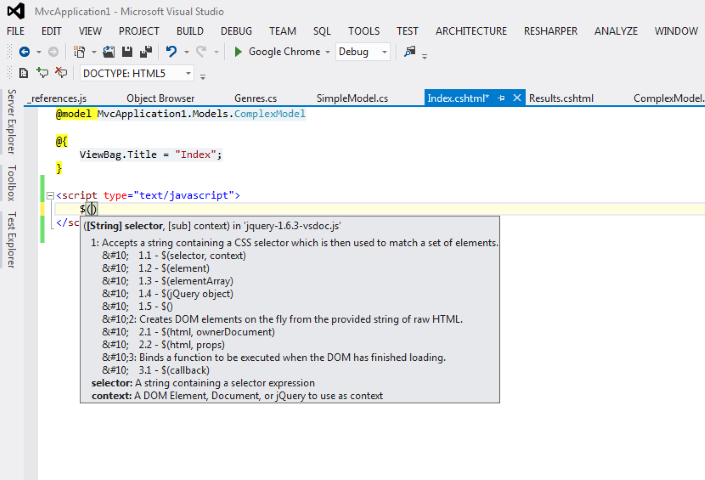 Yep, that’s the entirety of the view that you can see there (no @if(false) nonsense!), and that’s lovely jQuery IntelliSense being displayed as soon as you start typing $( !

Update (10/Feb/2013): Changed the screenshots to use a nicer elliptical highlighting and tweaked some references ever-so-slightly (i.e. change jQuery from 1.6.2 to 1.6.3)