SSH over SSL with Bitbucket and Github

I’ve recently decided to switch to using SSH (Secure Shell) access for all of my repositories on both BitBucket & GitHub.  I was previously using HTTPS access, however this frequently means that you end up with hard-coded usernames and passwords inside your Mercurial and Git configuration files.  Not the most secure approach.

I switched over to using SSH Keys for access to both BitBucket and GitHub and I immediately ran into a problem.  SSH access is, by default, done over Port 22 however this is not always available for use.  In a corporate environment, or over public Wi-Fi, this port is frequently blocked.  Fortunately, both GitHub and BitBucket both allow using SSH over the port that is used for SSL (HTTPS) traffic instead as this is almost always never blocked (Both Port 80 (HTTP) and 443 (HTTPS) are required for web browsing).

Setting this up is usually easy enough, but there can be a few slightly confusing parts to ensuring your SSH Keys are entered in the correct format and making sure you’re using the correct URI to access your repositories.  I found BitBucket that little bit easier to configure, and initially struggled with GitHub.  I believe this is primarily because GitHub is more geared towards Unix and OpenSSH users rather than Windows and PuTTY users.

Setting Up The Keys

The first step is to ensure that the SSH Key is in the correct format to be added to either your GitHub or BitBucket account.  If you’re using PuTTYGen to generate your SSH keys, the easiest way it to simply copy & paste the key from the PuTTYGen window: 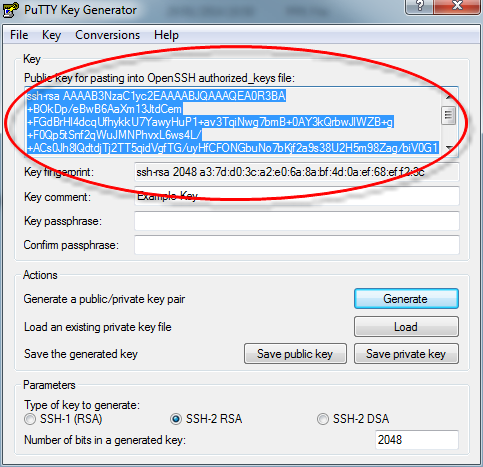 In my own experience, I’ve found that BitBucket is slightly more forgiving of the exact format of the SSH Key.  I’d previously opened my private SSH Key files (.ppk file extension) in Notepad and copied and pasted from there.  When viewed this way, the SSH Key is rendered in an entirely different format as shown below: 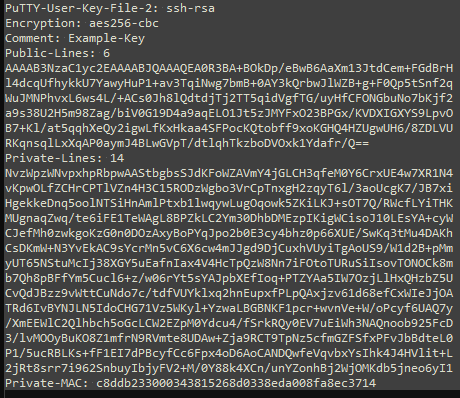 It seems that BitBucket will accept copying and pasting the “public” section from this file (identified as the section between the lines “Public-Lines: 6” and “Private-Lines: 14”) however GitHub won’t.  Copying and pasting from the PuTTYGen window, though, will consistently work with both BitBucket & GitHub.

The next step is to configure your client to correctly access your BitBucket and GitHub repositories using SSH over the HTTPS/SSL port.  Personally, I’ve been using TortoiseHG for some time now for my Mercurial repositories, but recently I’ve decided to switch to Atlassian’s Sourcetree as it allows me to work with both Mercurial & Git repositories from the same UI.  (I’m fairly comfortable with Mercurial from the command line, too, but never really got around to learning Git from the command line.  Maybe I’ll come back to it one day!)

BitBucket has a very helpful page on their documentation that details the URI that you’ll need to use in order to correctly use SSH over Port 443.  It’s a bit different from the standard SSH URI that you get from the BitBucket repositories “home page”.

Note the altssh.bitbucket.org domain rather than the standard bitbucket.org one!  You’ll also need to add the port to the end of the domain as shown in the image.

Configuring the client access for GitHub was a little bit trickier. Like BitBucket, GitHub has a page in their documentation relating to using SSH over SSL, however, this assumes you’re using the ssh command line tool, something that’s there by default in Unix/Linux but not there on Windows (although a 3rd party implementation of OpenSSH does exist).  The GitHub help page suggests to change your SSH configuration to “point” your ssh.github.com host name to run over Port 443.  That’s easy if you’re using the command line OpenSSH client, but if you’re using something like Tortoise or in my case, SourceTree, that’s not so easy.

The way to achieve this is to forget about fiddling with configuration files, and just ensure that you use the correct URI, correctly formed in order to establish a connection to GitHub with SSH over SSL.  The standard SSH URL provided by GitHub on any of your GitHub repository homepages (as shown in the image) suggests that the URL should follow this kind of format: 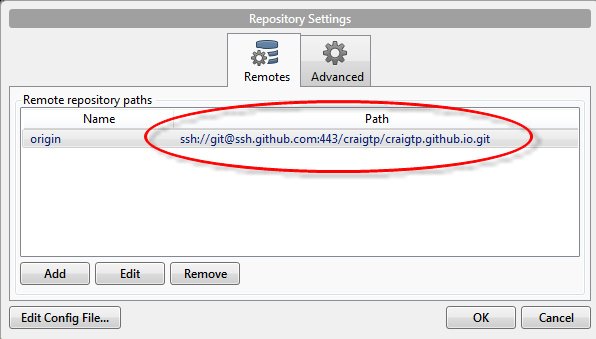 (Obviously, replace the craigtp.github.io.git part of the URL with the relevant repository name!)

It’s a simple enough change, but one that’s not entirely obvious at first.